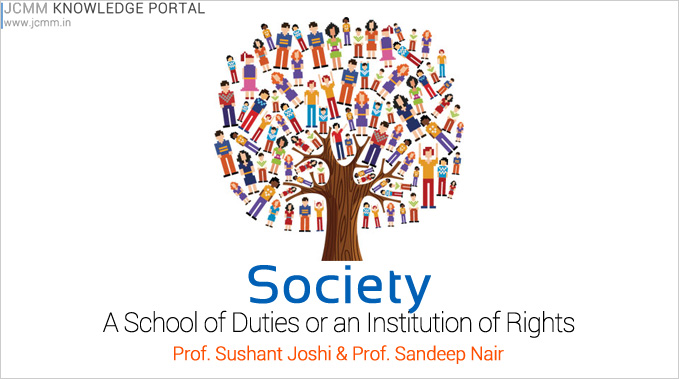 ‘Every right is a responsibility, opportunity is an obligation and possession is a duty’ – John Rockefeller

The man who transformed a fishing hamlet to a financial capital of the world, Lee Kuan Yew, believed that a nation will be known not by the rights it confers on the people but by the responsibilities they reflect towards the country. He believed that the state has a right to interfere in lives of its people for the larger good.

In time, when everyone talks about the fundamental rights and freedom, across all species and beings, it is worthwhile to reflect on our responsibilities. History has shown excessive rights, right with lack of understanding has led chaos and anarchy. In India, the expressions of individual rights have clearly unleashed a million mutinies and have threatened the nation’s integrity. As reflected in the regional, religious, communal, ethnic, environmental etc movements in way of finding a common ground for growth. As rights are primarily self centric it completely ignores responsibilities which is other centric and is foundation for social order.

Is this kind of society progressive or regressive? Why one has to ask for rights in a so called civilized and evolved society? Materialistically we may be progressive but morally we are becoming more regressive society.

There is flip side as well, with freedom comes responsibility and with rights there are duties. We talk about what we want? Do ever discuss what we give?. We are confused. With any unfortunate incident, we protest and expect Government to pass legislation. On the other side we also protest to strike down some other laws. Any abuse to people is a freedom of expression to us. Least no of laws or no laws is reflection of good society where everyone behaves responsibly and vise a versa. With more laws and regulations, is the crime and abuse coming down? The answer unfortunately is no. In fact there is an abuse of law observed and again we need one more law to regulate that. This is vicious circle.

Values are diminishing. We all need to reflect our own behavior and our relationship with others (society, nation, environment, and family). Each and every interaction has become a contract for us. Business transaction is a contract, relationship with others is a contract, and even marriages are a contract and contract can be easily broken. At the core of all there is “why only me” attitude. There is no trust, empathy or love. Everyone seems to be judgmental and judicious.

The forgotten link is faith and “Aatmiyata”, which is our core Indian value. It is all give and take. We read Mahabharata, but learn nothing. Mahabharat war happened because Duryodhana refused to give even five villages to Pandavas’ and told them that we would not even give one inch of land. We are all becoming Duryodhanas’, we are not ready to sacrifice anything, war is inevitable.

A man was on the top floor of the skyscraper when the fire broke in the apartment. People gathered to save and decided to use huge carpet to save him. They told him to jump on the carpet they were holding. The man refused to jump as he did not trust anyone of them. He was not sure whether they will hold the carpet and would not remove as he jumps. He told them to keep the carpet on the ground so that he could jump. Trust, faith, love, empathy and sacrifice are what we all need to develop to be happy or be ready to die.

As identities become virtual, relationships become contracts, education becomes commodity, religion becomes a ritual, and nature becomes negotiable, a nation begins to decline. Hence a change must begin in terms of perspectives. Rather than harping on the individualized rights, it is time to reorient towards responsibilities both individual and collective. Because a nation is a notion of people’s collective conscious and not just a source of patriotic sloganeering. It is our responsibility to ensure that it begins at home and is strengthen by education.

'Jugaad', very commonly and regularly used term in India. In fact it is said that…

Only put off until tomorrow what you are willing to die having left undone. - Pablo Picasso

About JCMM
Vision & Mission
The JGI Group
Our Infrastructure